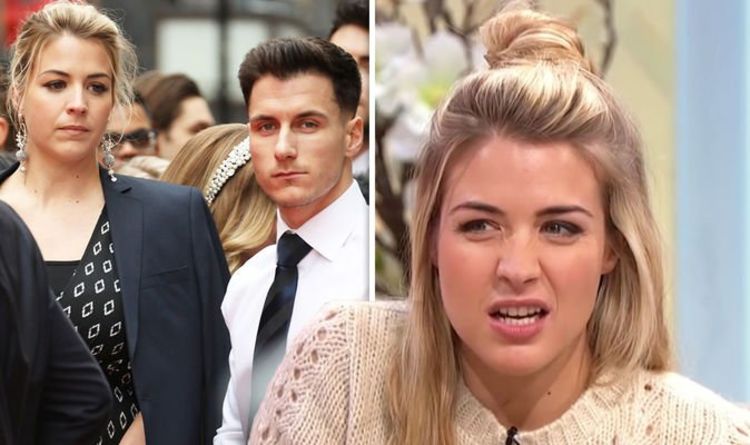 Gemma Atkinson, 34, was less than impressed when her beau Gorka Marquez refused her suggestion to go shark spotting on a boat. The pair got involved in an argument over the fish as they sat down to watch Shark Week together yesterday. Gemma, who recently gave birth to their first baby, Mia, was recorded by her other half as she revealed she had been swimming with “mega sharks” before. The former Emmerdale actress admitted in view of the Strictly Come Dancing professional’s 409,000 followers: “I’ve swam with them Gorks, s**t myself.”(sic)

Catching a glimpse of the toothy creature on the programme, Gemma suddenly gasped: “Oh look at the size of its mouth!”

In spite of their enjoyment of the dramatic TV show, things became tense between the new parents as they bickered over whether or not the fish was “dangerous” to humans.

Gemma shared another clip with her own one million Instagram followers as she demanded to know why Gorka was reluctant to get up close and personal with some sharks on a boat.

The dancer seemed concerned as he responded: “No we’re not,” to which Gemma exclaimed: “Why?”

In spite of the TV and radio personality’s protestations about the activity, Gorka insisted: “No because it’s dangerous!”

However, Gorka supported his claims by explaining in reference to the sharks: “They jump!

“Have you watched that guy? He was in the kayak in America and he was a photographer taking pictures…”

Gemma seemed unconvinced by her boyfriend’s story as she exclaimed: “Probably thought he was a seal. They don’t attack humans!”

Fortunately, the debate was quickly resolved between the pair when Gorka realised he had confused a shark for a killer whale in the story.

The ballroom dancing expert said to his girlfriend: “Let me finish! It wasn’t a shark, it was an Orca.”

Clarifying the situation, Gemma giggled as she asked her boyfriend if the animal in question was similar to the whale in the movie “Free Willy”.

Gemma Atkinson and Gorka Marquez’s argument comes after the former Strictly contestant opened up about her first experience with motherhood.

The blonde beauty took to Instagram earlier this month as she spent some time with her pet dog Ollie while baby Mia was asleep.

Speaking in a video, she said: “Mia is asleep and Norman [her other dog] is down the stairs, so I’m having a bit of one-on-one with Olly Bolly, because I don’t want him to feel left out and I think he has done a little bit today.”

The animal lover then cosied up to her pet pooch and gave him a kiss before adding, “you don’t need to though.”

Gemma captioned the clip: “Mia was at her 1st clinic today so it was all a bit mad and hectic and Ollie felt a tad left out.”

Lucy Verasamy: ITV weather star spills all on being the ‘girl next door’ type

January 9, 2019 Admin Comments Off on Lucy Verasamy: ITV weather star spills all on being the ‘girl next door’ type