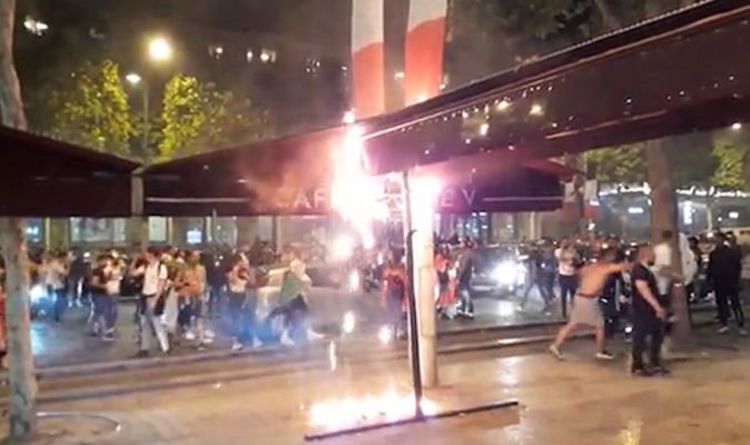 Parts of southern France descended into chaos on Thursday evening after Algeria beat Ivory Coast in the African Cup of Nations. One football supporter ran over a family, killing a woman, and seriously injuring her baby, as fans celebrated Algeria’s victory. In the video, pandemonium erupted on the streets of France, with flares let off in Paris which brought traffic to a standstill.

Some footage shows children running away from the chaos with their parents as the victory was celebrated.

He wrote on Twitter: “The damage and incidents committed last night on the sidelines of #CAN2019 celebrations are unacceptable.

“I salute the action of our forces mobilized in Paris and throughout the territory to maintain order and contain overflows. 43 people were arrested.”

A 21-year-old man was driving at high speed in the Mosson neighbourhood of southern city Montpellier on Thursday night when the mother was run down.

The mum was killed in front of her teenage daughter, with a young baby suffering traumatic injuries.

During the celebrations, three motorcycle dealerships were also looted as police used tear gas to control the crowds.

Local media reported that 20 police officers were left injured in clashes with fans.

Right-wing, National Front leader, Marine le Pen tweeted: “Death of a mother mown by an Algerian supporter: this is where state laxity and inaction of @CCastaner lead.

“Next Sunday, an important police device must prevent any overflow: it is about the safety of the French!”

January 19, 2019 Admin Comments Off on Mexico pipeline explosion: At least 20 killed and 71 injured after gasoline ignited