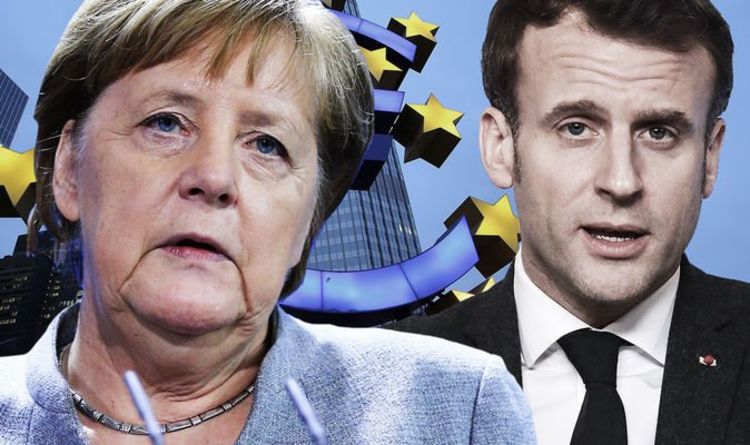 The eurozone hit a seven-year low today, sparking concerns of an economic crisis erupting across the European Union. Germany‘s economy stagnated while both France and Italy contracted during the last quarter. There is concern that the risk of coronavirus could deliver a decisive blow to the eurozone this year, dragging Europe into a recession.

At just 0.1 percent, the eurozone and the EU have both posted their weakest growth since early 2013, which is when the debt crisis risked a European recession.

Europe’s largest economies appeared to drag down the entire bloc, with Germany’s result far below expectations and down from an upwardly revised 0.2 percent in the third quarter.

Paul Sommerville of Sommerville Advisory Markets pointed out that Germany’s economy has been “flat for nine months”.

He warned that “Germany is on verge of recession again and these numbers are all from before coronavirus”.

JUST IN: EU contempt: Merkel claimed UK will never get what it wants

Economist Carsten Brzeski of ING echoed this concern, claiming the risk of a full-blown recession was hanging over Germany.

Germany has also been engulfed by a political crisis after Annegret Kramp-Karrenbauer, the politician seen as Angela Merkel’s successor, announced on Monday that she would step down from the CDU chair.

In response, CDU’s coalition partner, the Social Democratic Party (SPD), has said it could quit the governing alliance if Chancellor Merkel is forced out of office.

Mrs Merkel had claimed she would stay in place as German chancellor until 2021 but this may prove difficult if one of her political rivals secures the CDU leadership in the summer ballot.

A number of economists are worried that the sharp drop in industrial output and consumer spending could drag German and eurozone growth below zero.

The continued outbreak of the coronavirus in China could impact manufacturing supply chains, exports and travel.

Exports of goods to China account for 7 percent of all German exports, making up 2.8 percent of national output in 2018, according to the IMF.

September 10, 2018 Admin Comments Off on 'Two Britons' among at least seven INJURED in violent knife attack in Paris

Macron on the BRINK: Shock resignations and 'chaos' could force Macron into ‘PHASE TWO'

October 6, 2018 Admin Comments Off on Macron on the BRINK: Shock resignations and 'chaos' could force Macron into ‘PHASE TWO'