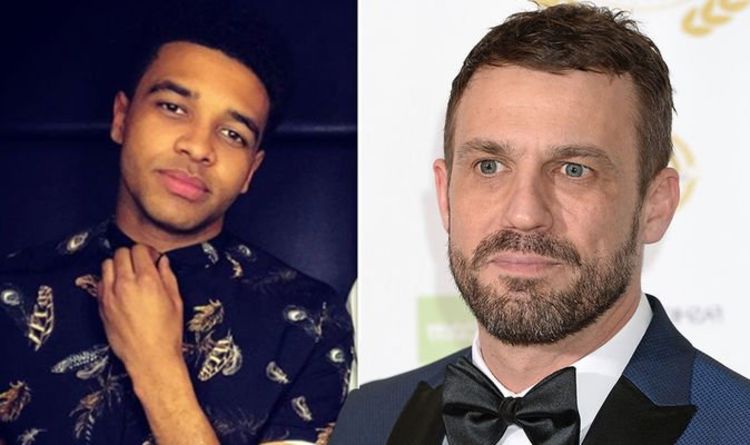 According to The Mirror, Emmerdale actor Asan N’jie was reportedly seen throwing punches at Jamie Lomas, 44, in a heated exchange at the London ceremony.

Following this, Asan reportedly had to be hauled off by security.

The publication added the spat began when Asan made a remark at Jamie, which he found offensive.

Now, a representative for ITV has told Express.co.uk they are investigating the alleged incident.

They said: “We are extremely concerned to hear about an incident at last night’s TV Choice Awards involving one of Emmerdale’s cast.

“Obviously we will be investigating and talking to the actor concerned in due course.”

A representative for Jamie Lomas declined to comment further to Express.co.uk.

The duo are yet to speak out about the alleged incident on social media.

The Mirror added Asan’s friend and actor Malique Thompson-Dwyer attempted to break up the fight.

He is quoted as saying: “I told him [Asan] to relax. I told him ‘This isn’t that kinda party. It’s the TV Choice Awards’.”

Asan was reportedly escorted out of the hotel, while Jamie stayed at the event until around 2am.

Earlier in the evening, Asan, who joined the soap last year, missed out on the award for Best Newcomer.

Emmerdale also scooped the award for Best Soap beating off the likes of EastEnders and Coronation Street.

Elsewhere, it was recently revealed Jamie will be reprising his role as villain Warren Fox in Hollyoaks next year.

A show source told Digital Spy: “Warren Fox is one of our greatest ever characters and our most dynamic, complex villain.

“Jamie Lomas is a leading man who we can’t wait to have back.”

Teasing what’s to come, they added: “Warren is back in the village and when the Fox is back, trouble isn’t far behind him.

“The village best be on their toes because there is plenty of unfinished business.”

Jamie was last seen as a permanent character on the soap in 2017, before a brief cameo appearance last year.

He first joined the soap in 2006 and has reprised his character multiple times.

The actor has also previously starred as Jake Stone in EastEnders and Jeff Durkin in Coronation Street.

Celebrity Big Brother 2018: Who is Natalie Nunn's husband Jacob Payne? How did they meet?

August 24, 2018 Admin Comments Off on Celebrity Big Brother 2018: Who is Natalie Nunn's husband Jacob Payne? How did they meet?

Dan Walker: ‘Going to be a disaster’ BBC Breakfast host in admission about wife Sarah

May 10, 2019 Admin Comments Off on Dan Walker: ‘Going to be a disaster’ BBC Breakfast host in admission about wife Sarah