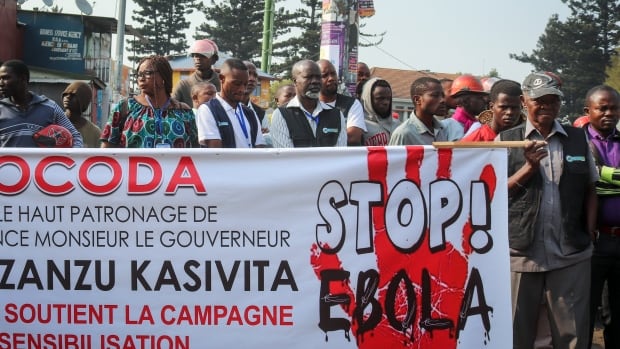 Ebola appears to be under control in the city of Goma in Congo but it has flared in other parts of the country, where aid workers are combating insecurity and disinformation on social media, the World Health Organization (WHO) said on Friday.

The latest infections include the mysterious case of a woman in her 70s with no known history of travel or visitors, said Dr. Michael Ryan, head of WHO’s health emergencies department.

The woman, in the remote village of Pinga in the northeast of Congo, may have caught the deadly hemorrhagic fever by eating bushmeat or from another animal source, he said.

Nearly 3,000 cases have been confirmed, including 1,965 deaths, since the outbreak began a year ago, the second biggest toll in the disease’s history, the latest figures show.

“Over the last couple of weeks we have seen worrying extensions of the disease …we have had a cluster of cases in Mwenga, to the south of Bukavu, we have a case in Pinga — which is very difficult and inaccessible area to the northeast of Goma,” Ryan told a news conference.

The case in Pinga, announced earlier this week by the health ministry, is in a militia-controlled territory of Walikale, hundreds of kilometers from where previous cases near the border with Uganda and Rwanda occurred.

“The challenge is this case has no apparent epidemiologic links to other cases or no recent travel outside or visitors from outside,” Ryan said.

“We obviously need to ensure that we haven’t had another spillover from the forest or from a zoonotic or animal source. That is currently under investigation and there is further testing going on and genetic sequencing,” he said.

Goma, a lakeside city of nearly 2 million people on the Rwandan border, has been on high alert for weeks after a gold miner with a large family contaminated several people before dying himself last month.

There are currently no cases in Goma, where four cases have been recorded, without further spread, Ryan said.

“We haven’t seen secondary transmission in Goma — and it represents a huge credit to the teams on the ground in a city the size of Goma that we are approaching the end of the observation period for all of the contacts with no evidence of further transmission within the metropolitan area,” he said.

Monitoring of 232 contacts of infected people will end in coming days, he said.

A vaccine and two experimental drugs, which have showed survival rates of as much as 90 per cent in a clinical trial, are effective tools, but face some opposition, he said.

“There are negative social media campaigns, people who have tried to convince populations that the vaccine is used to infect you and the therapeutics are used to finish you off,” Ryan said.

Software glitch may have delayed medical results for hundreds of patients

December 4, 2018 Admin Comments Off on Software glitch may have delayed medical results for hundreds of patients