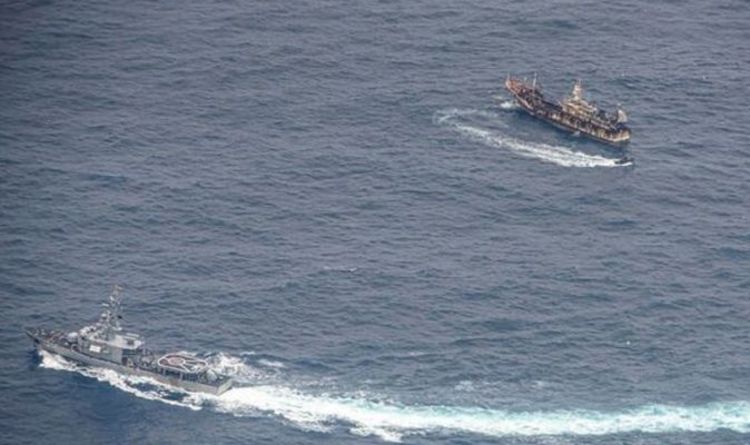 Robert O’Brien said China’s “illegal, unreported, and unregulated fishing, and harassment of vessels operating in the exclusive economic zones of other countries in the Indo-Pacific” threatened US sovereignty. As a result, the US national security adviser said new-generation Coast Guard vessels would conduct maritime security missions, such as fisheries patrols.

Mr O’Brien also said the coastguard planned to evaluate next fiscal year the feasibility of basing Fast Response Cutters in American Samoa in the South Pacific.

He stressed it would enhance maritime-domain awareness and enforcement efforts in collaboration with “regional partners who have limited offshore surveillance and enforcement capacity.”

He added in a statement: “Enhancing the presence of the USCG in the Indo-Pacific ensures the United States will remain the maritime partner of choice in the region.”

The statement described the United States as a “Pacific power.”

At the same time, Japan and the US began air, sea and land exercises around Japan in a show of force in the face of increased Chinese military activity in the region.

Keen Sword, which is held every two years, involves dozens of warships, hundreds of aircraft and 46,000 soldiers, sailors and marines from both nations.

The exercise is part of a joint vow to continue the military build-up aimed at countering China, which claims Japanese-controlled islands in the East China Sea.

It comes ahead of a planned visit to Asia by the US Secretary of State Mike Pompeo with a visit to Indonesia included as part of the itinerary.

President Pompeo recently led a meeting of foreign ministers from India, Japan and Australia this month in Tokyo.

US officials are hoping this group will develop as a bulwark against China’s growing assertiveness and extensive maritime claims in the region, including to most of the strategic South China Sea.

Responding to recent US actions, Zhao Lijian, spokesperson at the Chinese Ministry of Foreign Affairs, said at a briefing: “For some time, several US. politicians including Pompeo has been making all kinds of lie to viciously attack the CPC, hype up the ideological confrontation.

“The hysteria of Pompeo and his like will only rally the Chinese people’s greater support for the CPC and the Chinese government.

“According to surveys conducted by international authoritative institutions, the Chinese people’s satisfaction and trust toward the CPC-led Chinese government’s exceeds 90 percent, ranking the top among all governments across the world.

“As you see, this year, under the strong leadership of the CPC, the Chinese people stayed united and achieved strategic victory in fighting the virus.”

November 18, 2019 Admin Comments Off on Stand up for our soldiers: ‘Betrayed’ British war hero makes simple plea to Boris Johnson

September 3, 2020 Admin Comments Off on Switzerland vs EU: Referendum is proof of growing euroscepticism, says expert

Gucci blackface controversy: Why has Gucci been forced to say sorry over jumper design?

February 7, 2019 Admin Comments Off on Gucci blackface controversy: Why has Gucci been forced to say sorry over jumper design?