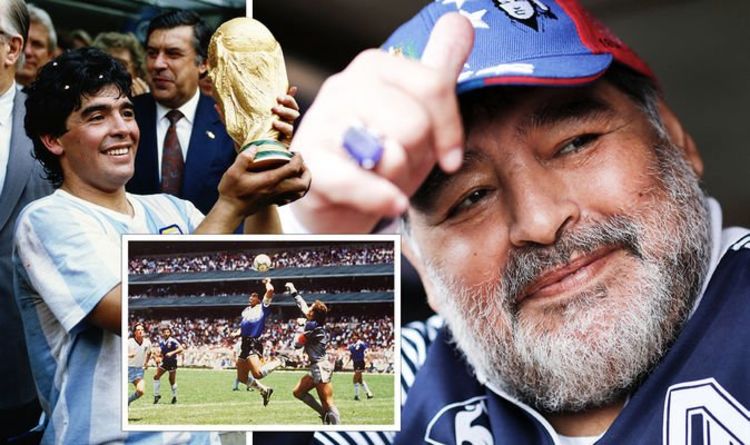 Football icon Diego Maradona has passed away aged 60 after suffering a cardiac arrest on Wednesday and was pronounced dead at the property near to where one of his two daughters with ex-wife Claudia Villafane lives. Maradona underwent surgery earlier this month to remove a blood clot from his brain.

He was released from the clinic in Buenos Aires two weeks ago.

The Argentine FA confirmed the news on social media, releasing a statement on Maradona’s death.

“The Argentine Football Association, through its President Claudio Tapia, expresses its deepest sorrow for the death of our legend, Diego Armando Maradona.

“You will always be in our hearts.”

Current and former footballers all over the world began paying tribute on social media after hearing of the sad news of Maradona’s passing.

Gary Lineker tweeted: “By some distance the best player of my generation and arguably the greatest of all time. After a blessed but troubled life, hopefully he’ll finally find some comfort in the hands of God. #RipDiego”

Marcus Rashford also paid tribute by posting a photo of a young Maradona captaining Argentina with the caption: “Legendary”

Brazil icon Pele mourned Maradona’s death, sending a poignant message: “Certainly, one day we’ll kick a ball together in the sky above,” he said.

“You took us to the highest place in the world. You made us immensely happy. You were the greatest of all,” he tweeted.

“Thanks for existing, Diego. We are going to miss you the rest of our lives.”

He tweeted: “RIP Legend. You still stay in the history of football forever. Thanks you for all the pleasure you gave to the whole world.”

Football clubs all over the world also paid their tributes to the iconic footballer.

Manchester United tweeted: “Football has lost one of its greatest icons. Rest in peace, Diego Maradona.”

Barcelona posted a photo of Maradona during his playing career at the Nou Camp along with the caption: “Thank you for everything, Diego.”

Maradona is widely recognised as one of the greatest footballers of all-time.

His second goal in the game though is widely regarded as one of the greatest ever scored at a World Cup which saw him dribble past five England players finally Peter Shilton to tap into an empty net.

However, while Maradona illustrious football career was starting to take shape in Italy, so was a cocaine addiction.

He was slapped with a 15-month suspension for violating drug regulations in 1991 and was thrown out of the 1994 World Cup after testing positive for ephedrine.

The final years of his career were masked in controversy, but his talents on the football pitch inspired a generation.

Lionel Messi, now regarded as the greatest footballer, admitted five years ago that Maradona helped shape his path into football.

“I never followed anyone in particular, although when I started to think for myself Diego [Maradona] had recently returned home,” he said in 2015.

“That was in 1993. He joined Newell’s Old Boys when he came back from Spain and was part of the national team that qualified for USA ’94.

“If anybody inspired me starting out, it was undoubtedly him.”

Maradona eventually retired from football in 1997 at the age of 37 and soon moved into management.

He took charge of Argentina’s national side in 2008 and left after the 2010 World Cup, when they were beaten by Germany in the quarter-finals.

Spells as manager in the United Arab Emirates followed before returning to South America and then back home to Argentina where he was the current coach of Primera Division club Gimnasia de La Plata before his death.

May 4, 2020 Admin Comments Off on Liverpool legend Graeme Souness claims ‘there will be a casualty’ when football returns

October 22, 2019 Admin Comments Off on Dan Biggar’s wife bought flights to World Cup even though Wales faced defeat vs France