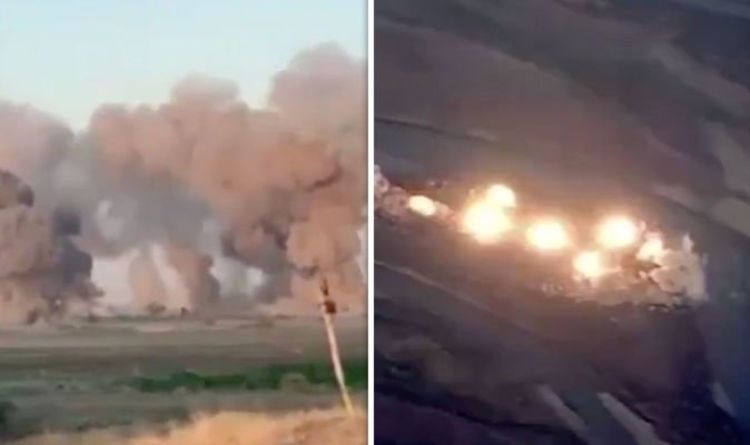 Dramatic footage posted on Twitter from the US military showed waves of explosions light up the island as mushroom clouds billowed into the air from Qanus Island, Iraq. The Twitter caption read: “Operation Inherent Resolve (OIR) spokesman Col Myles B. Caggins, said: ‘Here’s what it looks like when @USAFCENT F15 and F35 jets drop 36,000kg of bombs on a Daesh [ISIS] infested island.” Counter-terrorism groups in Iraq are also seen in the video observing the operation from the ground.

The attack on Tuesday was part of operations carried out by Iraqi forces and the US-led coalition against the Islamic state.

The terrorist group was defeated in Iraq in 2017.

The coalition claimed F15 and F35 warplanes took part in the bombing in the central province of Salaheddine, about 175 miles northwest of Baghdad.

Daesh is the Arabic term used for ISIS.

Maj Gen Hill added: “We’re setting the conditions for our partner forces to continue bringing stability to the region.”

JUST IN: Erdogan sends deeply dark demand to US over Syria – ‘Do not delay’

He added: “We know they are hiding in ungoverned spaces and Daesh is still trying to regenerate.”

The Maj Gen declared the coalition would stay and support the ISF (Iraqi Security Forces) “until no longer needed”.

Daesh networks are being attacked by the supported ISF allowing it to degrade capabilities.

“We do see some unraveling of their communications.”

In August, the OIR and the Syrian Democratic Forces reported they detained more than 225 suspected Daesh fighters in the last 4 months.

They reported they removed 4,000 pounds of explosives from the battlefield within the two months.

Within August more than 200 bombs were dropped on the terrorist group.

Following the cancellation, the Taliban warned on Sunday that Trump’s decision will cost more American lives.

December 14, 2018 Admin Comments Off on Lisbon tram crash: ‘British baby and child’ among 28 injured in Portugal