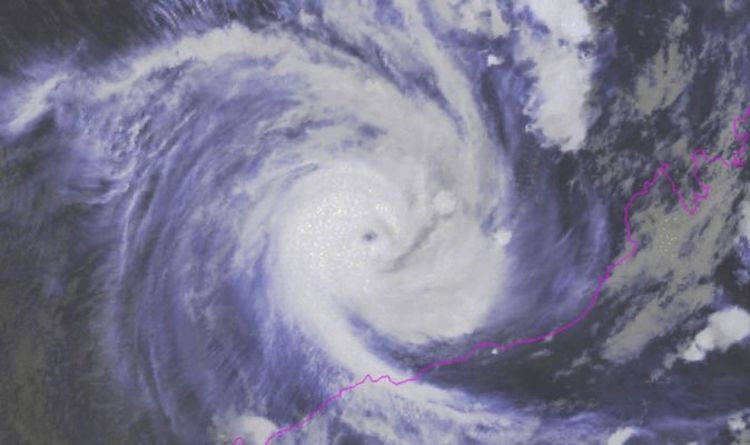 Winds gusts of up to 173mph can destroy and blow away caravans, send dangerous debris through the air and result in widespread power outages.

Department of Fire and Emergency Services superintendent John Newman has warned Veronica’s effect could be “catastrophic” in the worst instance.

He said: “In the worst case scenario, which would be the system crossing the coast to the west of Port Hedland and aligning with high tide, there is a very real risk of tides four metres above the highest astronomical tide.

“That will cause significant inundation to lower-lying parts of Port Hedland.

“The worst-case scenario often doesn’t get realised, but if it does occur, the impacts are catastrophic so we urge you to heed our warnings.”

There are approximately 50,000 people living along the Pilbara coast of Western Australia.

The massive cyclone is expected to cross the coastal area of Whim Creek in between Port Hedland and Karratha when it hits.

Town of Port Hedland mayor Milo Blanco urged residents to heed warnings from the emergency services and to look out for vulnerable people.

He said: “People of Port Hedland and South Hedland are warned of the potential of a very dangerous storm tide rising significantly above the high tide mark, with damaging waves and coastal inundation.

“If you see any community members or the elderly struggling to get ready for this dangerous weather event, lend a hand where you can.”

The Weather Channel forecasts up to 18 inches of rain for Port Hedland, Pilbara’s second largest town home to almost 14,000 people.

The current warning zone spread across Alyangula in the Northern Territory to Karumba in Queensland, and inland parts of the eastern Carpentaria District and the northwest Gulf Country.

What about Cyclone Trevor?

Another monster cyclone is threatening the Northern Territory at almost exactly the same time as Cyclone Veronica.

Cyclone Trevor will rip through the Gulf of Carpentaria with category 4 winds when it makes landfall on Saturday morning local time.

Winds of 170mph are forecast as it hits the coast between Port McArthur and the Northern Territory/Queensland board.

The cyclone sparked the biggest evacuation of the Northern Territory this week since the deadly Cyclone Tracy killed 71 people in 1974.