As the autumn breeze turns chilly in Canada, public health officials are seeing an uptick in COVID-19 cases across the country, which is putting a strain on the health-care system in some provinces.

In Manitoba, three more people have died as the province recorded 184 new cases of COVID-19 on Tuesday, setting a new record for the most cases in a single day, according to public health officials. Two of the people who died, a man in his 80s and a woman in her 80s, are connected to the outbreak at St. Boniface Hospital, while the third, a woman in her 60s, is connected to the Parkview Place care home outbreak.

There are now 83 people in hospital — three more than on Monday — and 15 people are in intensive care. 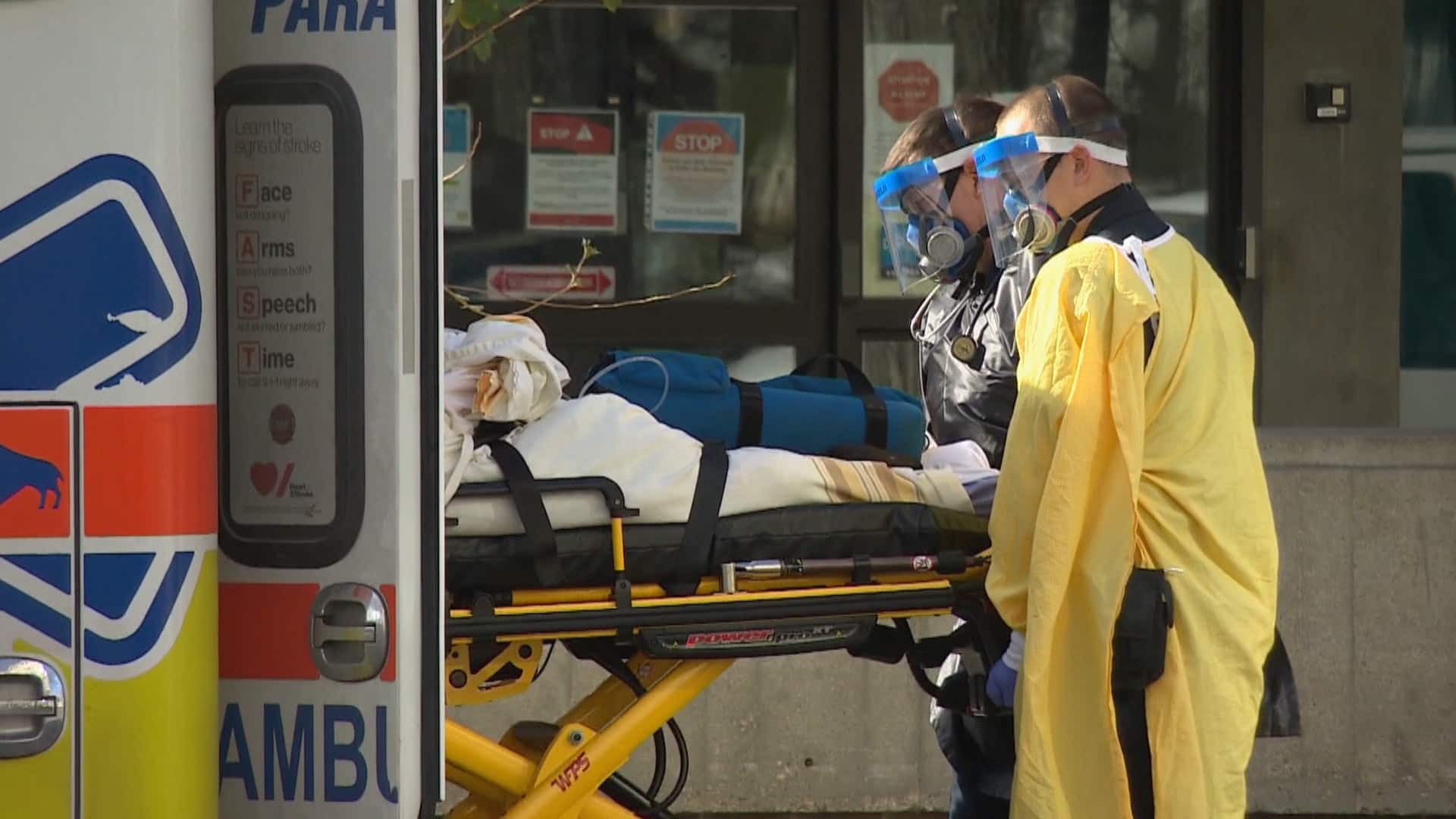 A weekend review by health officials from the Winnipeg Regional Health Authority has found changes are needed immediately at Parkview Place, the site of the deadliest COVID-19 outbreak at a Manitoba care home to date. 1:49

The temporary measure, which caps attendance at 15 for events where people will be “mixing and mingling” like parties and baby showers, applies in the Calgary and Edmonton areas.

Alberta has reported a total of 25,733 cases since the pandemic began, with 4,477 of those listed as active cases. As of Sunday, health officials reported 118 people were being treated in Alberta hospitals, with 16 of those patients in ICU beds.

Dr. Bonnie Henry, provincial health officer in British Columbia, also placed restrictions on gatherings on Monday, with a focus on events in people’s homes. Henry said gatherings are now limited to people in an immediate household, plus their so-called “safe six” guests. 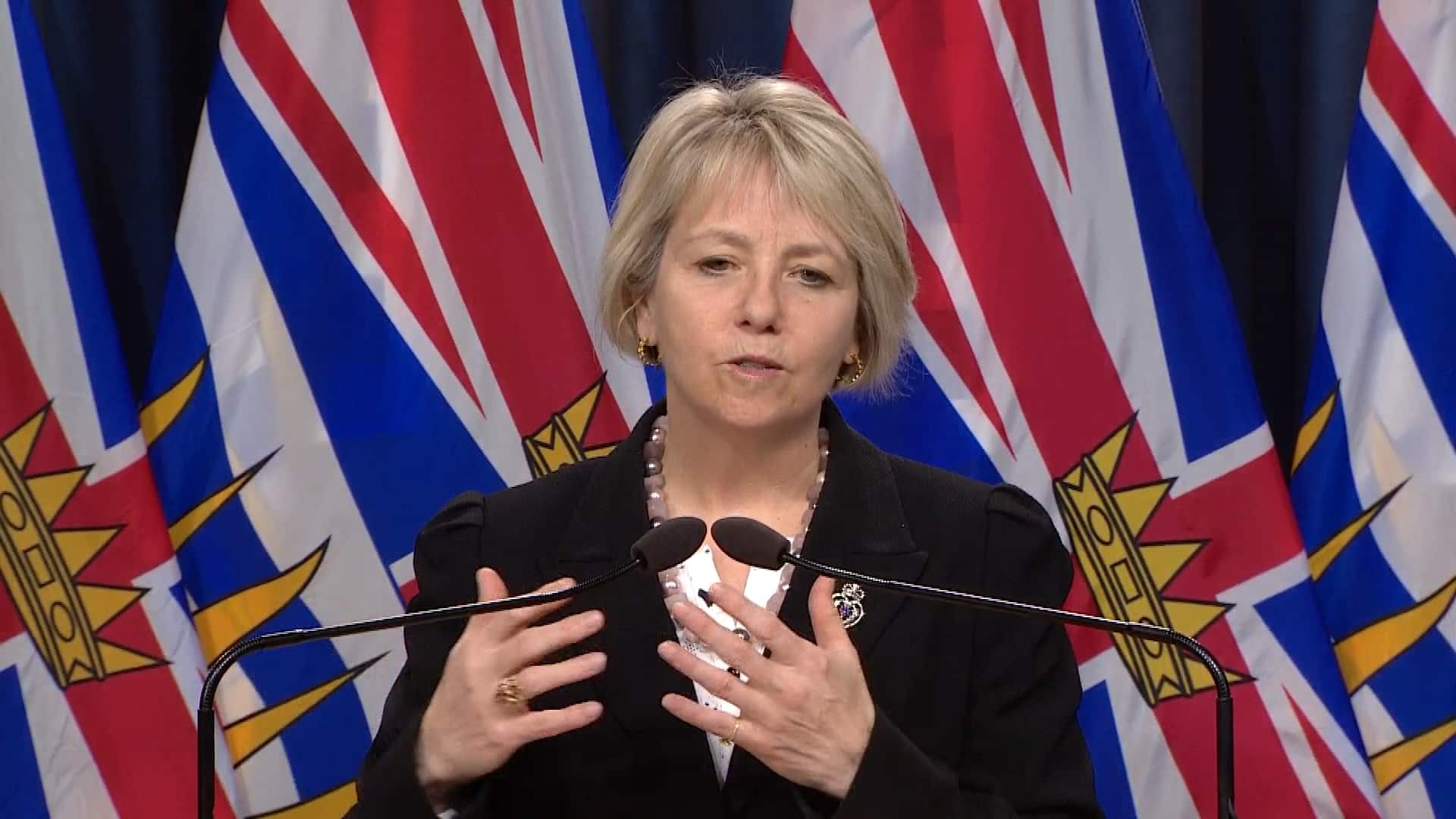 “This is a bit of a sobering weekend for us,” she said after provincial health officials reported 817 new cases since Friday.

B.C. has reported a total of 13,371 COVID-19 cases since the pandemic began, with 2,325 of the cases considered active. The most recent information from health officials said 77 people were in hospital with 26 in intensive care.

As of 2:20 p.m. ET on Tuesday, Canada had 222,190 confirmed or presumptive coronavirus cases. Provinces and territories listed 186,029 of those as recovered or resolved. A CBC News tally of deaths based on provincial reports, regional health information and CBC’s reporting stood at 9,999.

Roussin wasn’t the only Manitoba official with words of warning. Premier Brian Pallister expressed frustration on Monday at people with too many close contacts as cases increase.

“Grow up and stop going out there and giving people COVID,” the premier said.

Saskatchewan reported 54 new COVID-19 cases on Monday, bringing the total number of reported cases in the province to 2,783, with 650 of those considered active cases.

In Ontario, a region west of Toronto is waiting for word on whether tougher measures will be imposed by the province as part of the effort to fight COVID-19. Dr. David Williams, the province’s chief medical officer, said while neither he nor Halton Region’s local medical officer are ready to make a decision on tighter measures for the area, they will be watching case counts and other metrics closely in the coming days.

Ontario reported 827 new cases on Tuesday, with four new deaths. As of 10:30 a.m. ET, health officials said there were 312 people hospitalized in the province, with 75 in ICU.

Quebec Premier François Legault moved Monday to extend restrictions on people living in so-called red zones until Nov. 23, saying daily COVID-19 case numbers and deaths are still too high to allow an easing of limits in places like Montreal and Quebec City. The province reported 963 new cases on Tuesday and 19 new deaths, for a total of 6,172 deaths. Of the 19 deaths, four occurred in the last 24 hours.

According to provincial data, there were 527 people in hospital and 91 in ICU.

WATCH | How health authorities are trying to balance restrictions and COVID-19 caseloads: 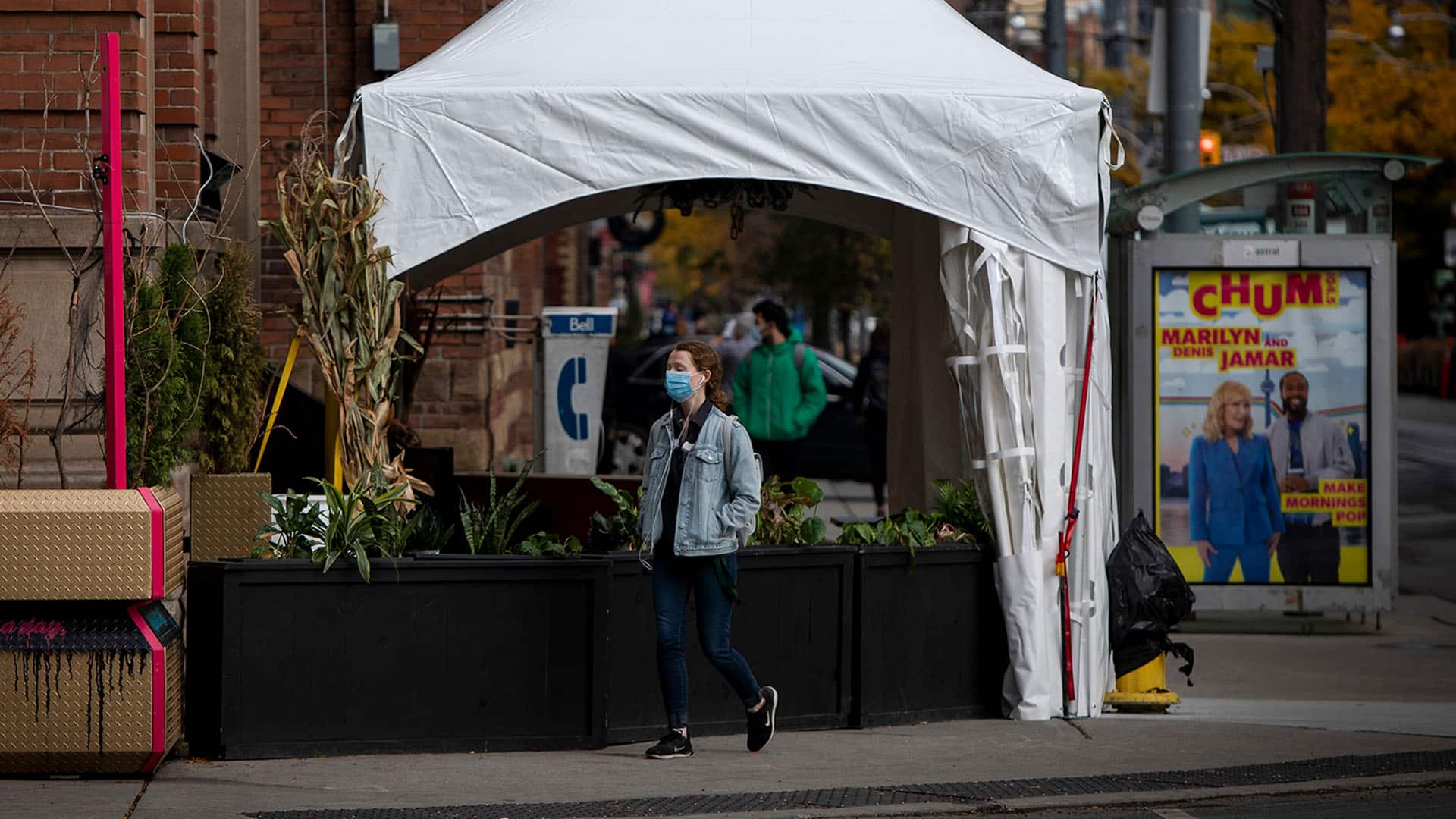 Infectious disease physician Dr. Zain Chagla discusses how health officials try to balance restrictions and COVID-19 case loads when the data doesn’t show up for weeks after a decision is made. 1:35

In Atlantic Canada, Nova Scotia reported one new case of COVID-19 on Tuesday, bringing the total active cases in the province to six.

P.E.I. reported no new cases and one active case Tuesday. Dr. Heather Morrison, P.E.I.’s chief public health officer, said the province has so far been spared the “devastating impacts” of COVID-19, but she noted that one super-spreader event could “tax our capacity to conduct contact tracing and provide the necessary critical care for Islanders with COVID-19 and those with non-COVID related critical care needs.”

New Brunswick reported three new cases and eight recoveries on Tuesday. The province has seen 334 confirmed cases since the pandemic began and 273 recoveries.

Newfoundland and Labrador reported no new cases and one recovery on Tuesday, breaking a streak of three days in which it reported one new coronavirus case on each day.

There were two new cases reported in Yukon on Monday, and a mine in Nunavut reported that two workers who had been reported as presumptive cases were confirmed as positive for COVID-19. The workers were flown to their home province of Quebec and instructed to self-isolate.

Several potential COVID-19 vaccines are seeing early results from Phase 3 trials, with AstraZeneca saying its has shown results in older and younger participants. Meanwhile, Moderna is so positive about its results it has applied to make its vaccine available earlier. 2:07

A case count maintained by Johns Hopkins University put the number of COVID-19 cases around the world at over 43.6 million as of Tuesday morning with over 29.2 million cases considered recovered. The Baltimore, Md.-based institution’s count of deaths stood at more than 1.1 million.

In the Americas, the number of hospitalized COVID-19 patients in the United States is at a two-month high, straining health-care systems in some states.

Nearly a million people in the U.S. have contracted the novel coronavirus in the last seven days, according to a Reuters tally, as cases and hospitalizations set fresh records in hot spots in the Midwest.

A Reuters analysis showed that more than 5,600 people died from the virus nationwide in the last week, with hospitalizations shooting up 13 per cent.

Health experts believe the virus is surging because of private social gatherings, colder temperatures driving people inside and fatigue with COVID-19 precautions.

“We are seeing all sorts of patients. The narrative historically has been the above-65, those with multiple co-morbidities. But we’re seeing 20-year-olds. We’re seeing 30-year-olds, 40-year-olds,” said Dr. Ogechika Alozie, an infectious disease specialist in El Paso, Texas. “There’s that exhaustion, but again, we buckle up and we take care of the patients.”

The White House said on Tuesday it saw a potential deal on COVID-19 stimulus funding in “coming weeks,” casting doubt on whether a deal could be struck with Congress before the Nov. 3 election.

A spokesperson for Democratic House Speaker Nancy Pelosi said Monday that she was hopeful an agreement could be reached ahead of the election, but noted that there were still major issues that needed to be addressed.

In the Asia-Pacific region, China reported the highest number of asymptomatic infections in nearly seven months. China detected 137 new asymptomatic coronavirus cases on Sunday in Kashgar in the northwestern region of Xinjiang after one person was found to have the virus the previous day — the first local new cases in 10 days in mainland China.

Hong Kong announced it would reopen public beaches and increase the number of people allowed to sit together in bars and restaurants starting Friday as the city continues to unwind strict COVID-19 rules put in place in July.

The case number reported Tuesday is the lowest since India had 35,065 newly confirmed infections on July 17. Last month, the country hit a peak of nearly 100,000 cases in a single day, but daily infections have been decreasing since then.

In Europe, nightly curfews have been implemented in French cities and in Spain, and restaurants and bars in Italy must close at 6 p.m. Schools have been closed in Northern Ireland and the Czech Republic. German officials have ordered de-facto lockdowns in some areas near the Austrian border and new mask-wearing requirements are popping up weekly across the continent, including a nationwide requirement in Russia.

Italy braced Tuesday for more protests in cities nationwide against virus-fighting measures like regional curfews, evening shutdowns for restaurants and bars and the closures of gyms, pools and theatres — a sign of the growing discontent across Europe with renewed coronavirus restrictions.

Germany, widely praised for keeping its infection rate well below other regions in the initial phase of the pandemic, is now facing a faster than expected surge in cases.

“It just needs to double again four more times and the system will be at a breaking point,” she said.

In Bulgaria, students at high schools and universities will continue their studies online for two weeks as of Oct. 29. The health ministry also banned public attendance at sporting events and said Tuesday that cinemas and theatres should operate at 30 per cent capacity until Nov. 12, while restaurants should limit the number of people at one table to six.

Meanwhile, Greece’s education minister tested positive for the coronavirus on Tuesday as the country saw a single-day record of 1,259 COVID-19 infections, according to the country’s health authorities.

Minister of Education and Religious Affairs Niki Kerameos said she tested positive for the virus, when she and her spouse were tested after he showed symptoms. In a statement posted to Twitter, Kerameos said she had no symptoms and would remain in isolation.

As Greece continues to report a steady increase in cases, nightly curfews from 12:30 a.m. to 5 a.m. were enforced in the capital Athens and the northern city of Thessaloniki last weekend.

Tuesday’s data put Greece’s total tally of COVID-19 cases since the start of the pandemic at 32,752, with 593 deaths.

South Africa remained the hardest hit country in Africa, with more than 716,000 recorded COVID-19 cases and more than 19,000 deaths according to the Africa CDC.

People in Iran, the hardest-hit country in the Middle East, faced new daily records of infections and deaths. Authorities have ordered residents in Tehran to wear masks in public, and many public sector workers in the capital have been told to stay home every second day.

May 18, 2019 Admin Comments Off on ‘Stem cell’ therapies offered at private clinics need to be approved as drugs, Health Canada says

August 27, 2020 Admin Comments Off on ‘I have a brother who’s an addict’: Emotional mayor highlights personal toll of northern B.C. overdose crisis