Ontario reported more than 1,000 new COVID-19 cases on Sunday as neighbouring Quebec saw 879 new cases — which put the hard-hit province’s cumulative case number at more than 100,000 since the pandemic began.

Writing in French on Twitter, provincial Health Minister Christian Dubé said in comparing the last two weeks, the number of cases is stable but remains high. Dubé urged people to make an effort to slow transmission of the virus, noting that new cases could lead to increased hospitalizations and deaths.

Quebec’s COVID-19 hospitalizations stood at 551, with 97 in intensive care.

Ontario, meanwhile, reported 1,042 confirmed new cases of COVID-19 on Sunday, a record number for a single day. Most of the new cases were reported in Toronto, York and Peel regions and Ottawa.

Dr. Isaac Bogoch, an infectious disease specialist and researcher at Toronto General Hospital, said that while the cause of the recent spike in Ontario is not entirely clear, the week ahead will offer a critical window for assessing the province’s progress in combating the pandemic.

Provincial figures from Sunday said 278 people were hospitalized due to the virus, including 79 in intensive care. 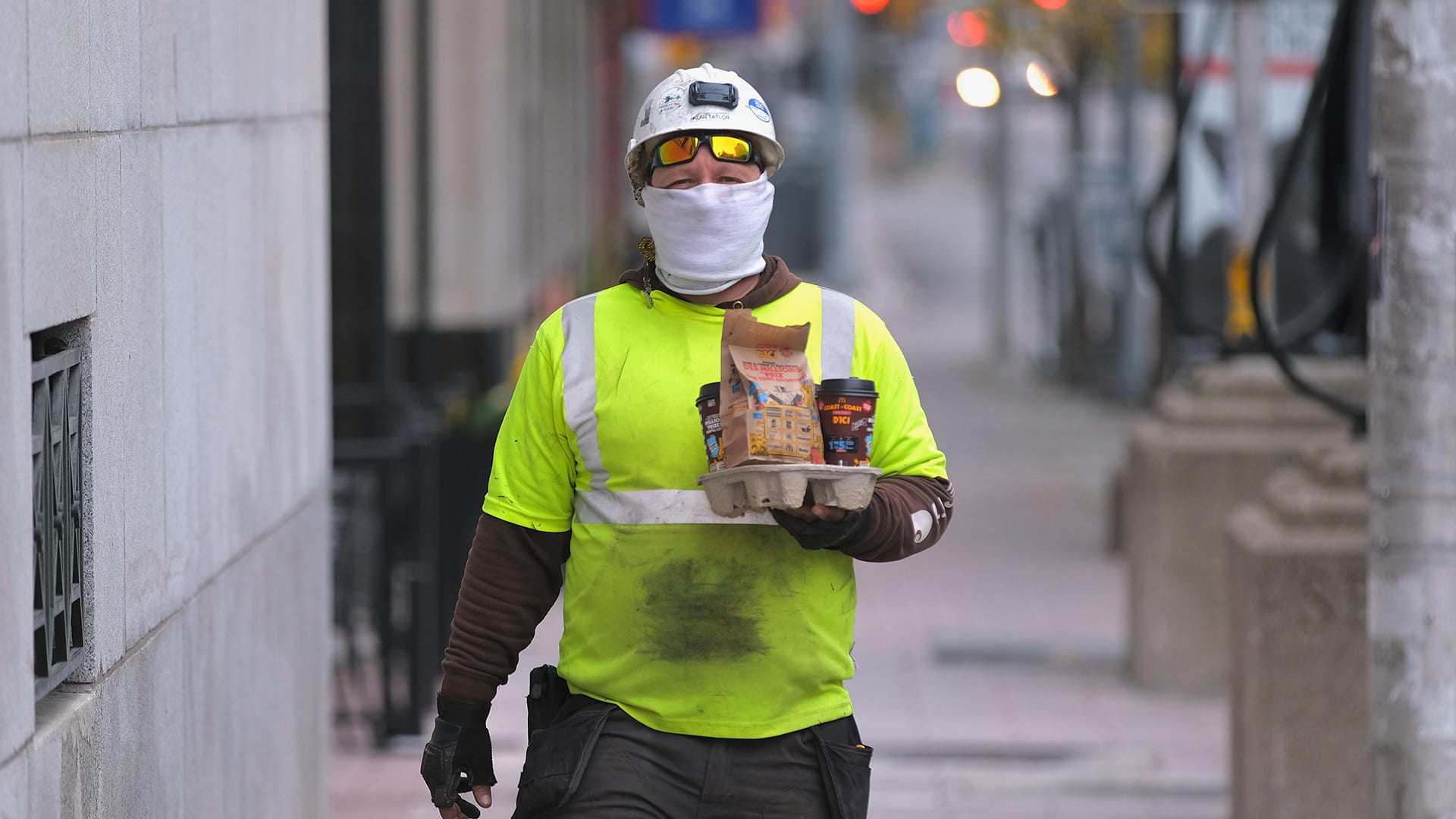 “As hospitalisations and deaths tend to lag behind increased disease activity by one to several weeks, the concern is that we have yet to see the extent of severe impacts associated with the ongoing increase in COVID-19 disease activity,” Dr. Theresa Tam, Canada’s chief public health officer, said in a statement on Sunday.

As of 6 a.m. ET on Monday, Canada had 216,104 confirmed or presumptive coronavirus cases. Provinces and territories listed 181,429 of those as recovered or resolved. A CBC News tally of deaths based on provincial reports, regional health information and CBC’s reporting rose to 9,946.

Voters are going to the polls today in Saskatchewan, the third provincial election since the pandemic began. Elections Saskatchewan said on Twitter over the weekend that 153,749 ballots were cast in four days of advance voting. That number is almost the same as the 2016 and 2011 advanced voting combined, the election agency said.

In Manitoba, provincial health officials reported 161 new COVID-19 cases on Sunday and four new deaths. A statement from officials Sunday said there were “77 people in hospital and 15 people in intensive care.”

Alberta, which reported 432 new COVID-19 cases on Friday, did not provide updated figures over the weekend.

In British Columbia, which did not provide updated numbers over the weekend, a school is facing a temporary closure. École de l’Anse-au-sable in Kelowna will be closed until Nov. 4 after 11 people tested positive and 160 more were asked to self-isolate.

New Brunswick health officials announced Sunday that two more people in the province “have lost their lives to the COVID-19 pandemic, bringing the total of lives lost to six.” The province also announced two new cases — one in the Campbellton region and one in the Fredericton region.

In Newfoundland and Labrador, health officials announced one new case of COVID-19, an Ontario man in his 60s who had recently travelled to western Newfoundland after he was granted a travel exemption. 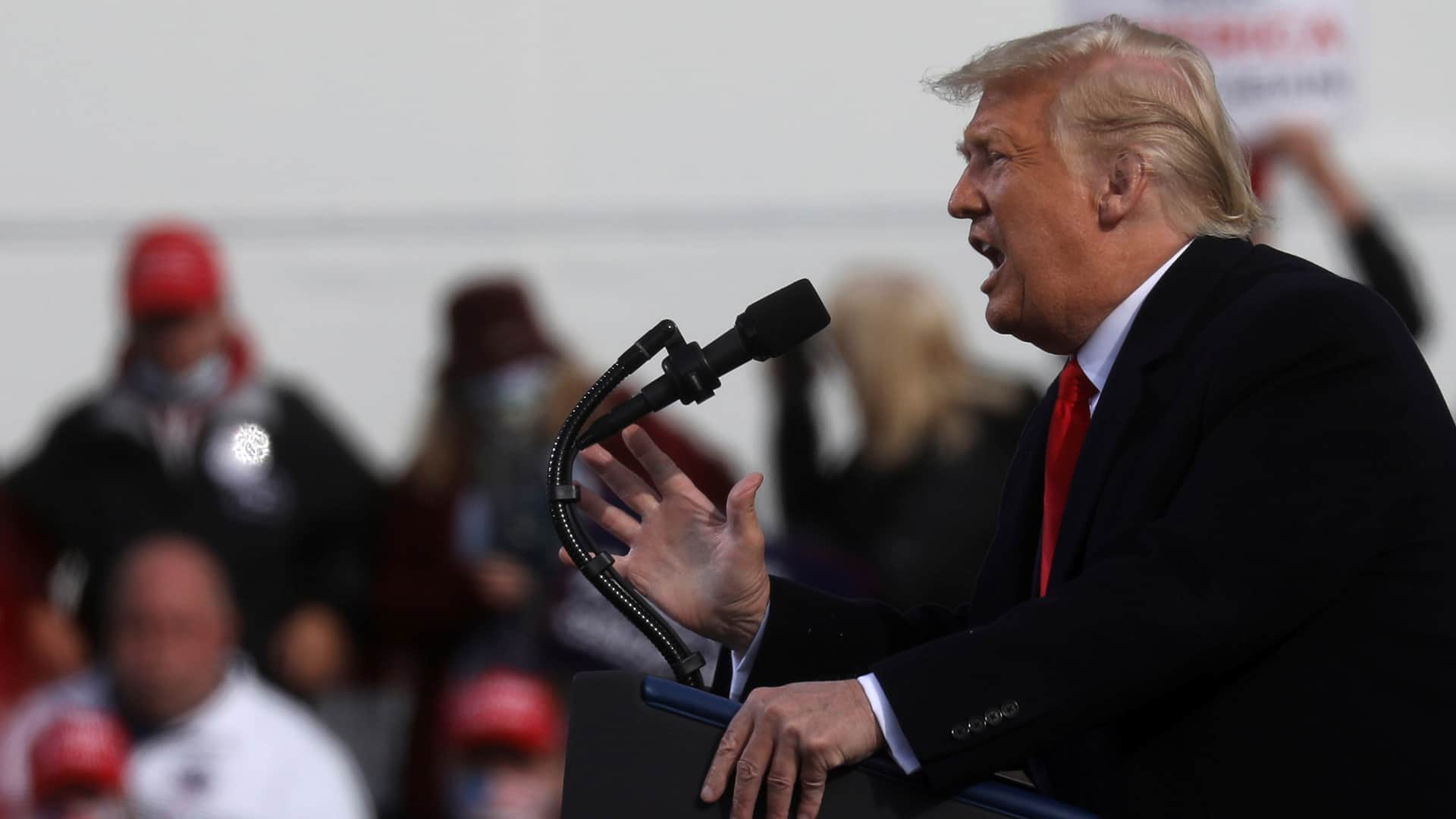 Trump continues to insist the U.S. is turning the corner as new coronavirus new cases surge across most of the country, with nine days to go before the election. 3:30

Johns Hopkins University, which has been tracking the global spread of the novel virus, reported 43,121,946 cases worldwide, with 28,989,995 cases listed as recovered, as of 7:20 a.m. ET on Monday. The Baltimore-based university reported 1,154,746 deaths worldwide.

In Europe, France was reporting that virus patients now occupy more than half of the country’s intensive care units, and some doctors are urging tougher restrictions after another record jump in confirmed infections. Dr. Jean-Francois Delfraissy, head of the government’s virus advisory body, expressed surprise Monday at the “brutality” of the rise, after more than 52,000 new cases were reported Sunday.

France has been among countries hardest-hit by the pandemic, reporting 34,761 virus-related deaths. It is currently registering more than 340 positive cases per 100,000 people nationwide each week.

In Spain, which has had more than 1 million cases of the disease, Prime Minister Pedro Sanchez warned the country was facing an “extreme” situation as he announced a new state of emergency on Sunday, imposing local nighttime curfews and banning travel between regions in some cases.

In the Asia-Pacific region, Australia’s former coronavirus hot spot Melbourne will largely emerge from lockdown after the city on Monday recorded its first day without a new COVID-19 case in more than four months. Victoria state Premier Daniel Andrews said from 11:59 p.m. on Tuesday all shops, restaurants, cafes and bars will be allowed to open and outdoors contact sports can resume.

India on Monday reported fewer than 46,000 new coronavirus cases, continuing a downward trend, though rising air pollution and the Hindu festival season continue to raise fears of a fresh surge in infections. The country’s health ministry said that 45,148 new cases raised the country’s overall toll to over 7.9 million. The ministry also reported 480 new fatalities, raising the death toll to 119,014.

In the Americas, the race for the U.S. presidency continues amid the global pandemic, with U.S. Vice-President Mike Pence campaigning on Sunday despite a COVID-19 outbreak among his aides. The pandemic, which has caused about 225,000 U.S. deaths and left millions of Americans jobless, remains front and centre in the presidential race.

Mexican health authorities acknowledge the country’s true death toll from the coronavirus pandemic is far higher than previously thought, saying there were 193,170 “excess” deaths in the year up to Sept. 26. Of those, 139,153 are now judged to be attributable to COVID-19. Mexico’s official, test-confirmed death toll is only about 89,000, but officials previously acknowledged many people didn’t get tested or their tests were mishandled.

In the Middle East, Qatar has signed an agreement with drugmaker Moderna Inc to buy its potential COVID-19 vaccine as soon as it is approved and released for global use, state news agency QNA quoted a health official as saying on Sunday.

Israel will begin human trials for a potential COVID-19 vaccine developed by a research institute overseen by the country’s defence ministry on Nov. 1 after receiving regulatory approval, the ministry said on Sunday.

Have a coronavirus question or news tip for CBC News? Email us at COVID@cbc.ca

‘My biggest fear is people falling through the cracks’: Doctors sound alarm about proposed billing changes

December 1, 2019 Admin Comments Off on ‘My biggest fear is people falling through the cracks’: Doctors sound alarm about proposed billing changes

June 18, 2020 Admin Comments Off on Mandatory mask laws are spreading in Canada

April 1, 2019 Admin Comments Off on Here are the changes the Ford government has put in place for April 1