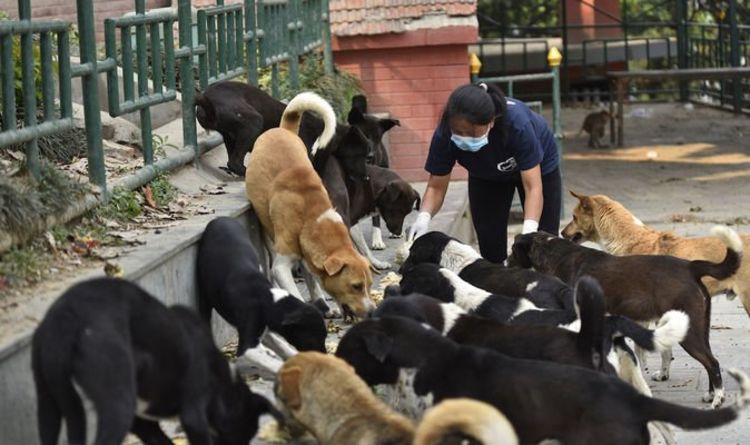 In China dogs are considered a delicacy as much as sweet bread in Britain, escargot in France, lobster in the US. As dogs are pets many view the ancient tradition of canine cuisine abhorrent, especially animal rights groups who have for years campaigned against the Lychee and Dog Meat Festival that happens each year in China.

It will be a significant shift in a country where 10million dogs are killed each year for their meat should legislation pass to reclassify them as pets.

On Wednesday, China’s ministry of agriculture said: “As far as dogs are concerned, along with the progress of human civilisation and the public concern and love for animal protection, dogs have been specialised to become companion animals, and internationally are not considered to be livestock, and they will not be regulated as livestock in China.”

Wendy Higgins, a spokeswoman for the animal welfare charity Humane Society International, said: “This draft proposal could signal a game-changer moment for animal protection in China.”

The charity says some of the 10million dogs consumed have often been stolen pets.

The city of Yulin in the Guangxi region holds the annual dog meat festival in June each year.

Despite its sought after status dog consumption has become increasingly unpopular in China.

Last month, the city of Shenzhen become the first region to ban it.

The coronavirus is widely believed to have originated in horseshoe bats.

It added that 13 “special” species that wold be exempt from animal trading restrictions, including including reindeer, alpaca, pheasants, ostriches and foxes.

Eleven weeks after Wuhan became the epicentre of the virus outbreak, lockdown measures were lifted.

The country now has 81, 865 confirmed cases, with 3,335 deaths, though cases in Wuhan and the surrounding regions are beginning to drop, areas in the north of the country are experiencing spikes in cases.

China’s economy is being closely watched by governments all around the world as model for what might happen when they ease lockdown measures.

Fears over an imminent recession are beginning to become realised as developed nations implement generous relief packages to offset mass unemployment as a result of the pandemic.

In the US, the Federal Reserve said it would unleash an additional $ 2.3trillion (£1.8trillion) in lending.

In the past three weeks more than 16million people have made unemployment claims after around 95 percent of Americans were put on some form of lockdown.

The EU is facing a similar “deep, deep recession” in the words of the BBC.

Earlier this week the bloc’s 27 finance minsters pulled an all-nighter to provide a financial solution to help shield the worst-hit countries – nothing of the sort was reached despite the 16 hour video call.

February 23, 2019 Admin Comments Off on China and Indonesia set to CLASH as tensions over South China Sea ESCALATE

Christianity crackdown: Cross TORN DOWN from church in fresh attack on worshippers

October 15, 2018 Admin Comments Off on Christianity crackdown: Cross TORN DOWN from church in fresh attack on worshippers