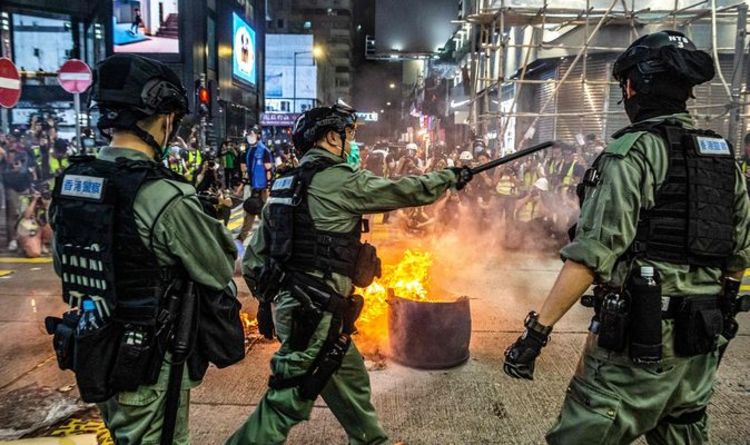 In a joint appeal published yesterday, Secretaries of State and foreign affairs ministers from Australia, Canada, New Zealand, the United Kingdom and the United States all said they were worried about the state of democracy in the semi-autonomous region of China. The Chinese government provoked international outcry in late June by imposing a controversial national security law on the region.

Many fear the law could erode the unique freedoms held by Hong Kong citizens, compared to people who live in the Chinese mainland.

Specifically, the recent statement from the five countries focussed on the year-long delay of a Hong Kong election, which was due to take place in September this year.

It is understood a number of Hong Kong government opposition candidates have been banned from standing in the elections.

In a statement, foreign affairs officials including the UK’s Dominic Raab and the US’ Mike Pompeo, said recent moves in Hong Kong “undermined the democratic process.”

“We call on the Hong Kong government to reinstate the eligibility of disqualified candidates so that the elections can take place in an environment conducive to the exercise of democratic rights and freedoms as enshrined in the Basic Law.

“Beijing promised autonomy and freedoms under the “One Country, Two Systems” principle to the Hong Kong people in the Sino-British Joint Declaration, a UN-registered treaty, and must honour its commitments.

The government said its reason for the bans was that the candidates were not fit to run for office due to breaching a number of requirements for lawmakers, according to the BBC.

These requirements include not advocating for Hong Kong independence and not expressing an objection to the new national security law.

The Hong Kong government denied the bans constituted political censorship or an infringement of freedom of speech.

Joshua Wong, a Hong Kong based activist who was one of the banned nominees, blasted the government for its choice.

He said in a tweet: “Clearly, Beijing shows a total disregard for the will of the Hong Kongers, tramples upon the city’s last pillar of vanishing autonomy and attempts to keep Hong Kong’s legislature under its firm grip.”