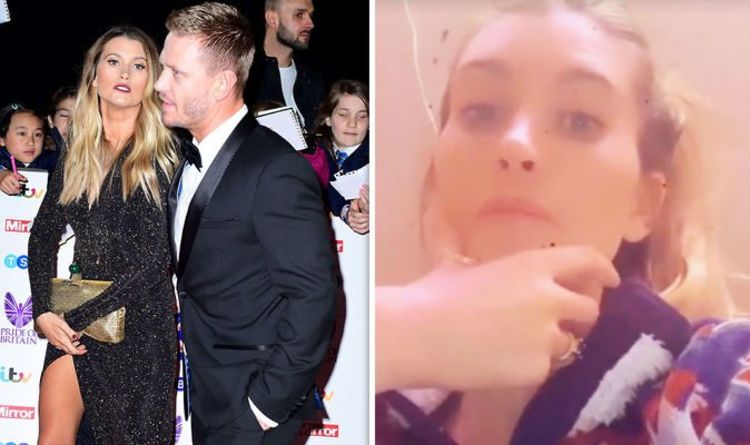 Emmerdale star Charley Webb, 32, has revealed her husband Matthew Wolfenden’s plans with their 10-year-old son Buster have been “a lot for her brain to compute” this evening. The Debbie Dingle actress admitted she was secretly fuming over Matthew’s decision to tuck into a pizza while watching a movie with their eldest child in the couple’s bed in an effort to spend more quality time with him.

Charley explained that she was trying her best to “be cool” about the idea, but was struggling because the concept of eating food in bed usually makes her feel nauseous.

The mum-of-three, who also shares sons Bowie, five, and Ace, one, with her Emmerdale co-star and other half Matthew, addressed her inner conflict over their movie night in an Instagram video.

She said in view of her 487,000 followers: “So, Matthew’s having a film night tonight with Buster in our bed on the big screen and having pizza in bed. In my actual bed.

“Just don’t talk to me about [it]. I’m trying really hard to just deal with it but, yeah, that’s a lot – pizza in bed.

“I’m trying to be the fun mum, so Bowie is having his film night on Friday, just trying to basically have a bit of one to one time, which in normal circumstances we’re quite good at.

“But with lockdown and all being stuck in the house it’s so hard.”

Charley then emphasised her disgust in the captions of her videos, which read: “They’re having pizza in bed. In. Bed.

“Trying to be so cool about it, but, that’s a lot for my brain to compute.”

“We purposely ordered it a little bit later so that he’d be asleep because he is good at going to bed in the night time.

“But no, his favourite thing in the world is food, he knew it was arriving, so he decided he was going to stay awake and then pretend that the door woke him up, ‘Oh, it woke me up, was that the pizza man?’”

Charley continued: “So I snuck him downstairs to eat pizza with me, he’s just so cute I can’t cope!

“And then I’ll have my nights with them next week.

“I can’t wait, I really, really love having just one of them.”

Charley recently returned to the Dales following her maternity leave, after giving birth to Ace in 2019.

The actress married her co-star Matthew – who plays David Metcalfe – in a romantic surprise ceremony the previous year.