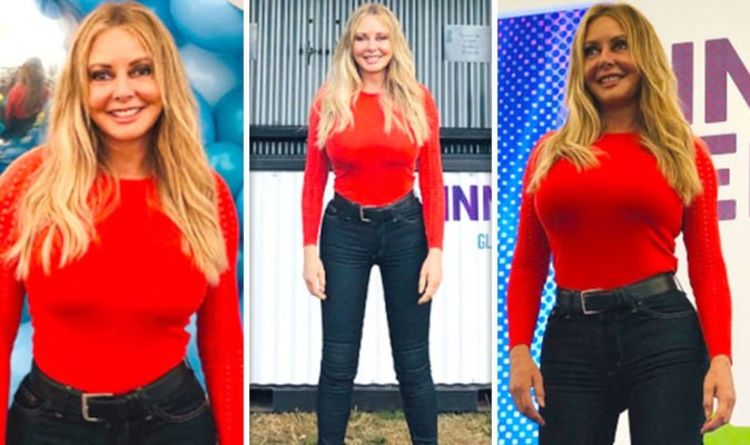 Carol Vorderman, 58, made a surprise appearance at an environmental event in Ipswich today.

The Countdown legend took to Twitter early this morning to share snaps with her 413,000 followers from the Innovate East event that is taking place at Trinity Park Showground.

The television and radio star is at a three-day event, organised by Anglian Water and Essex & Suffolk Water, to tackle the modern challenges facing the water industry.

Carol, who gave a keynote speech today, could be seen standing in front of a “water bar“ in a very tight red top and skinny jeans, which perfectly showcased her award-winning “rear of the year”.

Wearing her hair loose over her shoulders, the curvy star added a leather belt to her outfit to accentuate her slim waist and finished off her look with a pair of black ankle boots.

The former I’m a Celebrity… Get Me Out Of Here! contestant helped open the event, which will discuss how to balance modern life with protecting the environment for future generations, before attendees headed off to partake in hacks, dashes and sprints.

Earlier in the week, the mother-of-two was in Wales for the It’s My Shout awards ceremony.

The popular presenter wowed in a figure-hugging lace dress to show support for the scheme designed to help young people into the creative industries in Wales.

November 23, 2019 Admin Comments Off on Anton du Beke would be ‘happy’ to dance with a man amid Strictly same-sex routine backlash

September 6, 2018 Admin Comments Off on Celebrity Big Brother: Jermaine Pennant to have talks with wife over Chloe Ayling scandal