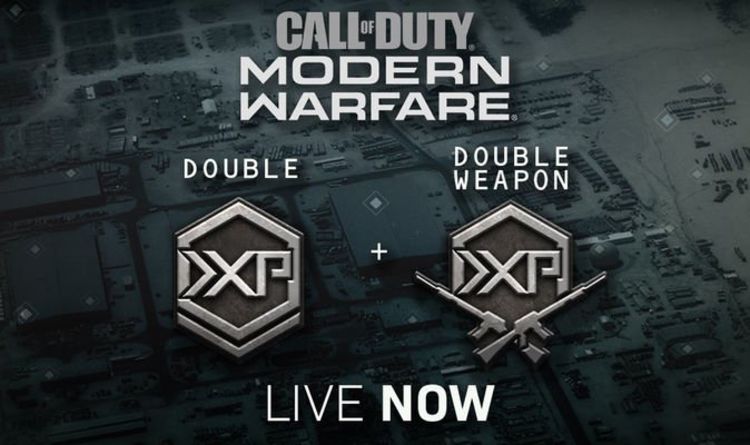 Call of Duty Modern Warfare gamers on PC, PS4, Xbox One are getting the chance to make big progress this weekend.

Plenty of updates are being planned for the latest COD launch and a lot of it will be dropping next week.

That’s when Infinity Ward is releasing Modern Warfare Season 1, which is being dubbed the biggest free content drop in Call of Duty history.

While that might be true, there’s still plenty to do before the next major update drops.

Activision has announced today that gamers will be able to make some real progress this weekend when it comes to levelling up their gear.

That’s because a new Call of Duty Modern Warfare Double XP event is being held over the coming days.

COD fans will have around four days of Double XP available to help push them their progression.

The Double XP event is scheduled to end on November 2, just a day before Season 1 launches.

There is both Double XP for characters and Double XP available for weapons throughout the weekend.

The new event is tied to the progression changes being made as part of the Modern Warfare Season 1 release.

Player Officer Rank will start over for those who have reached a certain point, with plenty of incentive in place to push on.

“Season 1 is almost upon us, and to celebrate the biggest content drop in Call of Duty history, Infinity Ward is turning on Double XP from now until December 2, so you can focus on completing the Officer Progression you’re already undertaking,” a message from Infinity Ward explains.

“On December 3, your Officer Rank achieved up until the start of Season 1 will be locked and memorialized with all the ribbons and final Officer Rank you have earned.

“That, as well as the two-weapon blueprints you may have unlocked for ranking up prior to Season 1 (the Hush at Rank 56, and O.G. at Rank 155 that D-Day is carrying in the previous image), should act as impressive bragging rights to your friends and the greater Call of Duty community!

“At the start of Season 1, those who have made it into the Officer Ranks (Rank 56+) will have their Officer Rank refreshed, beginning a new journey up the Season 1 Officer Progression track (from Rank 56 to 155).

“Players will find another 100 ribbons to earn through a new set of challenges, leading up to a new and distinct animated emblem.

“Anything you’ve earned in the Enlisted Ranks, as well as your Mission progress, Blueprint weapons, and Combat Record stats, will be carried over.

“If you haven’t reached the Officer Ranks by the time Season 1 begins (that is, you’re Rank 54 or less on December 3), you’ll continue to progress through the remaining Enlisted Ranks, before entering the Season 1 Officer Rank Progression.”

Plenty of new maps, modes and cosmetics are being primed for launch as part of Call of Duty Modern Warfare Season 1.

The new expansion will be going live on Tuesday, November 3 and will be available on PS4, Xbox One and PC at the same time.

Fortnite Lightsabers are back: Here’s how long Star Wars lightsabers will be in Fortnite

May 4, 2020 Admin Comments Off on Fortnite Lightsabers are back: Here’s how long Star Wars lightsabers will be in Fortnite