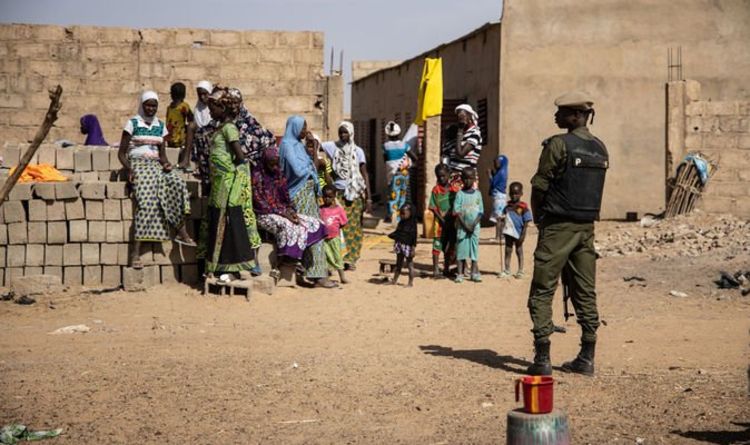 The terrorists stormed a Protestant church in the north of the country before carrying out the horrific attack. According to the regional governor, 24 people were killed 18 were injured and others were kidnapped. Col Salfo Kaboré described the gunmen as “armed terrorists” and said the group “attacked the peaceful local population, after having identified them and separated them from non-residents”.

It  is still unclear who was responsible for the attack, but Burkina Faso, a former French colony in West Africa, has become the frontline of a jihadist insurgency spearheaded by al-Qaeda, ISIS and affiliated terror groups.

Last week suspected jihadists in Sebba seized seven people at the home of a pastor.

Five bodies were found three days later, including that of the pastor, according to the local governor.

The timing of today’s massacre, during a church service in the village of Pansi in the Yagha region, mirrors that of previous attacks on Christians in the past year, including church attacks and assassinations of pastors and priests.

The violence threatens to wreck traditionally peaceful relations between Burkina Faso’s majority Muslim community and its Christians, who make up about a quarter of the population.

Many Muslims have also been killed by armed groups over the past year. Last October, gunmen stormed a mosque during Friday prayers and killed 15 people.

Earlier, the French Armed Forces Ministry announced a French soldier had died while on operations in the strife-torn country.

The ministry said the causes of the death of Sergeant Morgan Henry were unknown for now and an investigation was underway into the circumstances behind his death.

It is not thought to be linked to the church massacre at this stage.

Former colonial power France intervened in the Sahel region, south of the Sahara, back in 2013 to drive back militants who had seized northern Mali the previous year.

The jihadists have since regrouped to step up attacks in Mali, Burkina Faso and Niger.

November 6, 2018 Admin Comments Off on 'No horse deserves to die for gambling' Melbourne Cup fury – horse PUT DOWN in tragic race