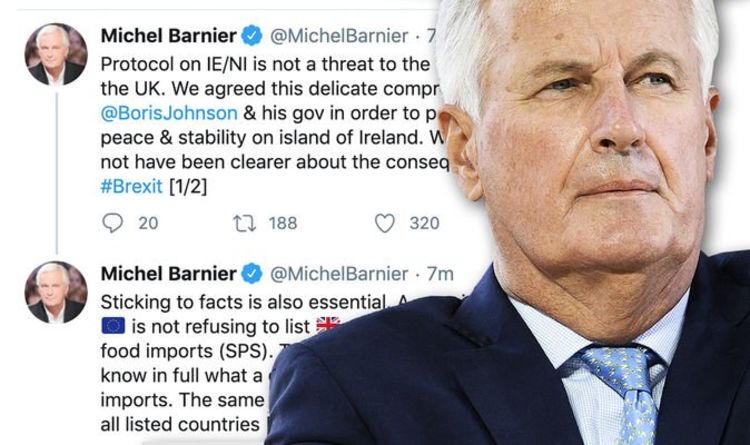 “A case in point:the EU is not refusing to list the UK as a third country for food imports (SPS).

“To be listed, we need to know in full what a country’s rules are, incl. for imports.

“The same objective process applies to all listed countries.”

On Friday Mr Barnier retweeted a statement by the EU’s UK Coordination Group and the leaders of the political groups of the European Parliament, issued after meetings with himself and Mr Sefcovic.

It stated: “EP political group leaders and UKCG members are deeply concerned and disappointed that the UK Government published an Internal Market Bill that clearly represents a serious and unacceptable breach of international law.

“It violates the Withdrawal Agreement that was signed and ratified by the current UK Government and Parliament less than a year ago.

“The Internal Market Bill gravely damages the trust and credibility that the European Parliament has already said is ‘an essential element of any negotiation’, thus putting at risk the ongoing negotiations on the future relationship.”

JUST IN: ‘EU is like China only worse!’ Donald Trump confronted Merkel on bloc

Writing in the Telegraph yesterday, Mr Johnson said: “We never seriously believed that the EU would be willing to use a treaty, negotiated in good faith, to blockade one part of the UK, to cut it off, or that they would actually threaten to destroy the economic and territorial integrity of the UK.”

The EU is demanding the UK withdraws the legislation by the end of the month.

Cabinet Minsiter Michael Gove was involved in a tense meeting with European Commission Vice President Maros Sefcovic on Thursday at which the pair discussed the controversial Internal Market Bill, which will override parts of the Withdrawal Agreement.

Afterwards Mr Gove, Chancellor of the Duchy of Lancaster, told reporters: “The UK government is committed to the implementation of the Withdrawal Agreement and the (Northern Ireland) protocol.

“I explained to (him) that we could not and would not do that and instead I stressed the vital importance of reaching agreement through the joint committee on these vital questions.”

Major and Blair, in a joint letter to the Sunday Times, said: “What is being proposed now is shocking.

“How can it be compatible with the codes of conduct that bind ministers, law officers and civil servants deliberately to break treaty obligations?”

Theresa May, Mr Boris Johnson’s predecessor, has also said the plan could undermine trust in Britain among international partners.

Justice Secretary Robert Buckland has said he will resign if the Government breaks the law “in a way that I find unacceptable”.

Mr Buckland insisted he did not believe the UK will “get to that stage”, saying legislation which could break international law was a “break the glass in emergency provision if we need it”.

September 13, 2019 Admin Comments Off on Trump fury as EU bank ‘attacks’ US exports in bid to prop-up ailing Eurozone economy