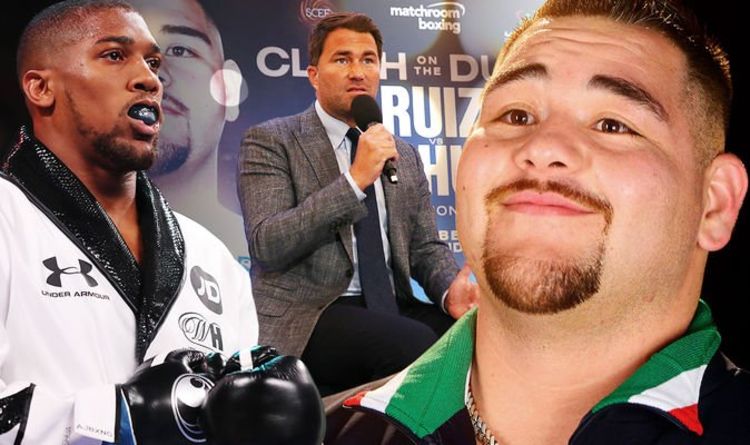 The Matchroom chief called a press conference on Monday in London to announce that the crunch clash has been finalised for December 7 in Riyadh after weeks of negotiations.

Ruiz has since fired back by sensationally claiming that the contest will take place in the United States.

He said during an Instagram Q&A: “I know everybody is talking about the fight and all that but we got real news coming soon.

“Of course [I’m taking the rematch] but it’s going to be on our terms; we’re going to bring it back to the United States.”

The Destroyer also accused AJ of being “scared”, adding: “Why do you think he’s over there trying to make the fight in Saudi Arabia?

“Like I said, I don’t have any protection over there, so if the United States of America wants to… never mind, I can’t say nothing.

“The fight is going to happen soon.”

The Principality Stadium in Cardiff and Madison Square Garden were the two options being seriously considered by Joshua and his team before lucrative offers from the Middle East.

Of course in Cardiff, he would have the advantage of a British crowd.

The stadium also has a roof, which is ultimately what ruled Wembley Stadium out of the running due to the time of year.

Joshua was also keen on righting the wrongs of his first career defeat in New York, but now the rematch is set for Riyadh with the view that it will be neutral ground for both fighters.

Hearn also revealed that Dubai, Qatar and the United Arab Emirates also approached him about staging what will be the biggest fight of the year.

The 40-year-old said earlier this week: “Both fighters have signed for this rematch and all governing bodies have been informed.

“There was a lot of talk about where this fight would be held but we wanted to go somewhere who believed in the sport of boxing and had a vision.

“There is another world outside of Cardiff and Madison Square Garden and we have an obligation to grow the sport of boxing in new areas and regions.

“This event could change boxing forever, because if Saudi Arabia are willing to invest in these fights, you could see a big change in the dynamic of the sport.”

Next week, Hearn will travel to Saudi Arabia to begin planning for the arena, which is set to be a 12,000-seater open-air stadium.

He confirmed that fans who purchase a ticket will automatically get their visa included as part of the deal. More information is expected to be released during the fight’s press tour in September which travels to Saudi Arabia, London and New York.

September 9, 2018 Admin Comments Off on Serena Williams bursts into tears and brands umpire THIEF in US Open final defeat