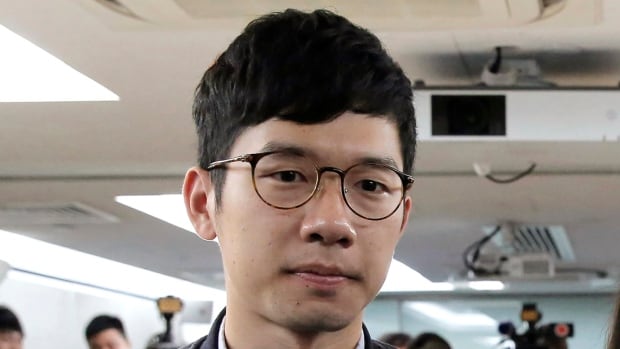 Hong Kong pro-democracy activist Nathan Law said he has arrived in London after fleeing the former British colony where China has imposed a security law.

“With my backpack and small luggage in hand, I boarded my night flight. I had no idea what future awaited me. Only one thing seemed certain. My destination: London,” Law said on Twitter.

“There’s always one message I have: Hong Kongers will never give up. We aren’t fractured. On the contrary, we’re well-equipped to face the next difficult battle.”

Law spoke to CBC News from an undisclosed location in a Front Burner episode that aired last week. He said the decision to leave family and friends was difficult, but with the risk of prison under the new legal framework for protesting, he believed his advocacy would be more effective elsewhere.

“For me, leaving Hong Kong is actually more than a personal choice. It’s a strategic move for the movement,” he said.

THREAD:<br>1. With my backpack and small luggage in hand, I boarded my night flight. I had no idea what future awaited me. Only one thing seemed certain. My destination: London. <a href=”https://t.co/iSfEh5870J”>pic.twitter.com/iSfEh5870J</a>

Law, 26, and fellow activists Joshua Wong and Agnes Chow announced on June 29 they were disbanding their Demosisto group just hours after Beijing passed the national security bill. They were among the student leaders of the so-called Umbrella Movement of widespread protest in 2014 in response to planned changes to Hong Kong electoral laws.

Law then was elected as Hong Kong’s youngest-ever legislator at age 23, but was among a small number disqualified from serving after offering words of protest during their swearing-in ceremony.

“You can chain me. You can torture me. You can even destroy this body but you will never imprison my mind,” Law said, quoting Mahatma Gandhi, instead of the traditional oath.

He also participated as protests roiled Hong Kong last year in response to a bill that would have expanded extradition to China for those charged with offences in Hong Kong.

The new legislative package grants mainland China more powers to insert itself in the affairs of Hong Kong, and includes penalties of up to life in prison for offences deemed to consist of secession, subversion, terrorism and collusion with foreign or external forces.

Critics have said those four areas are so ill-defined that it could lead to overreach and a stifling of all dissent.

“That is the power of the politics of fear. It will lead you to self-censorship to a degree that you can never express what you genuinely mean.”

Law told Reuters earlier this month that the rest of the world should stand up to Chinese President Xi Jinping and start to put human rights above financial gain.

So far, there has been international condemnation over the legislation as breaching the “one country, two systems” framework agreed to when Hong Kong returned to Chinese rule in 1997, but little in the way yet of specific reprisals.

The European Union said Monday it is preparing countermeasures on China in response to Beijing’s new security law, but envoys stressed the likely steps will not amount to economic sanctions.

Diplomats said there was broad support among EU member states for some action, but tough measures were not being discussed in detail because of resistance from China’s closest trade partners in Europe, such as Hungary and Greece.

The broad and ambiguous offences under China’s new national security law have Hong Kongers censoring themselves, fearing a maximum sentence of life imprisonment. Pro-democracy protesters are holding up blank sheets. Cafes are stripping their messages of support. One of Hong Kong’s most prominent and outspoken activists, too, has left the territory altogether. Today on Front Burner, pro-democracy activist Nathan Law joins us from an undisclosed location. He’ll take us through the years of unrest leading up to China’s crackdown, and how these measures threaten the unique freedoms that came with living in Hong Kong. 22:30

“We have agreed today to develop a co-ordinated European Union response to show support for Hong Kong’s autonomy and civil society,” Borrell told a news conference after the meeting.

“This will comprise measures both at the European Union level and also measures falling on the member states’ national competencies in a co-ordinated approach.”

He said nothing specific had been decided, but that EU foreign ministers had discussed extending the EU’s export ban on “sensitive technology” to Hong Kong.

Borrell was referring to any equipment or software that could be used for suppressing protests aimed at preserving Hong Kong’s autonomy granted under terms of its handover back to China by Britain in 1997.

Borrell said EU governments could announce national steps separately, but the 27-nation bloc viewed its response as a package to be defined and made reality “in the coming days.”

In 1997, China promised to maintain Hong Kong’s democratic system and civil liberties for 50 years. But many believe a new security law imposed upon Hong Kong by Beijing effectively means the end of democracy there. Diana Fu — a China expert at the Munk School of Global Affairs and Public Policy — discusses the potential fallout over the law and the decisions Hong Kongers have to make now about whether to stay and whether to keep pushing for democracy or censor themselves. 20:31

Finland said it supported the idea of suspending extradition treaties with Hong Kong since the new security law meant detainees could be transferred to mainland China — where courts are controlled by the ruling Communist Party.

In Geneva, the United Nations special rapporteur on freedom of opinion and expression said on Monday that it will be important to see whether authorities use their discretion in interpreting the new law to impose restrictions on freedom of expression and the right to peaceful assembly.

“I am extremely concerned about the future of Hong Kong particularly with the adoption of the national security law,” David Kaye told the news briefing.